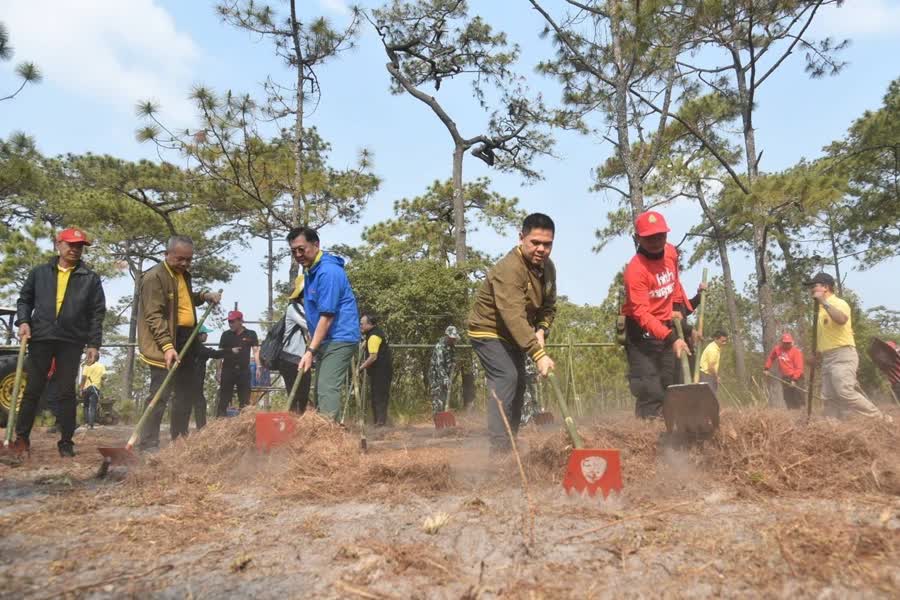 BANGKOK (NNT) - Forest fire at Phu Kradueng has caused considerable damage to this popular tourism site. The mountain destination will be closed this year for six months from April to September to allow for the restoration of its natural resources. The Minister of Natural Resources and the Environment has made aerial surveys of the area, where newly constructed firebreaks have helped mitigate the effects of fire.

The Minister of Natural Resources and the Environment Warawut Silpa-archa, along with the Phu Kradueng National Park chief Sombat Pimprasit, has flown over affected areas of the forest fire in Phu Kradueng national park, where some 100 kilometers of 20 to 50 meter wide firebreaks have been constructed.

The firebreaks have proven to be effective in containing the fire, by preventing flames from spreading into the other side. Prescribed burning in a controlled manner is however required in the construction of each firebreak, where officials must be very careful not to let the controlled fire spread further and become a disaster.

Tractors have been airlifted up the mountain to aid the operation, making it the first airlift operation using helicopters in 40 years of forest firefighting.

The Department of National Parks, Wildlife and Plant Conservation’s (DNP) Thanya Netithammakun said today the fire on Phu Kradueng is now 100 percent under control, with 3,400 rai (5.44 sq km) damaged by the fire in 2-3 zones. The most damaged areas are at the Benguet pine forest close to Na Noi cliff, and Lang Pae - Mak Dook.

He said this is the most severe forest fire in seven years, however the forest should restore itself in the rainy season, as new sprouts have already been found growing from burnt trees, especially pine trees.