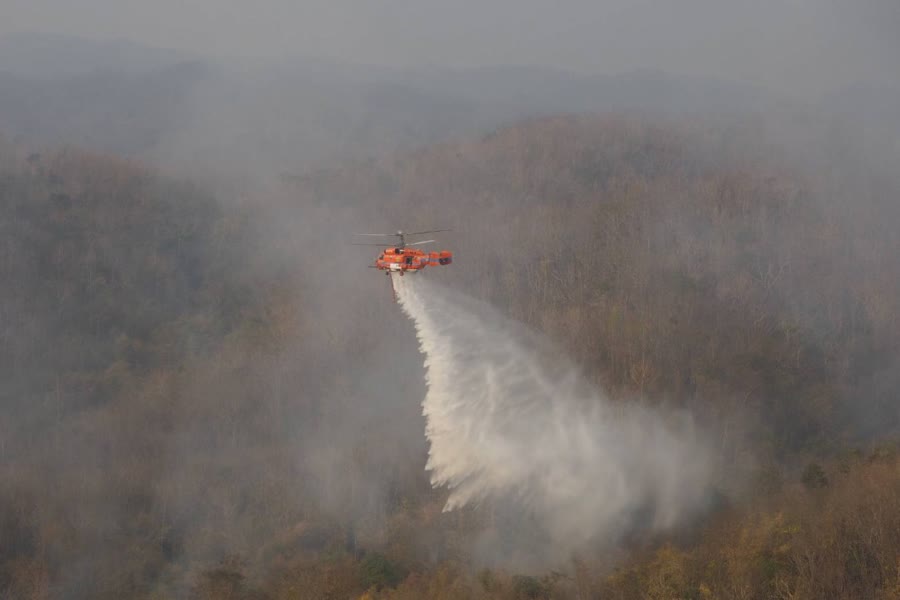 NAKHON NAYOK (NNT) - Forest fires continue to ravage Nakhon Nayok province, particularly Khao Falami in Khao Phra subdistrict, which is near Khao Yai National Park. Officers have rushed to extinguish the fires and prevent them from spreading into Khao Yai National Park. However, fires have now been detected in some areas of the national park.

The Department of Disaster Prevention and Mitigation deployed helicopters to contain the fires in Khao Falami by using water from Huai Prue Reservoir in Nakhon Nayok. At present, plumes of smoke can still be seen in the area.

Wildfires were also detected near Sai Thong Reservoir in Khao Phra subdistrict. The area is part of Khao Yai National Park. Forest officials used water from Huai Prue and Sai Thong reservoirs to fight the blaze. Military helicopters were deployed to transport water to the location. Officials inspected the forest areas to bring the situation under control. Fire trucks were deployed to prevent the fires from spreading into nearby communities.

Khao Falami is about four kilometers from the Chulachomklao Royal Military Academy (CRMA). It is also close to Khao Yai National Park. The fires spread quickly because the central province has seen no rain for over four months, and dry leaves are potential fuel for forest fires.

Fires were still spreading today in Khao Mot Daeng and Khao Kwang in Khao Yai National Park. Relevant units rushed to prevent the fires from spreading deeper into the forests. They had already affected the habitat of wild animals. Helicopters were deployed to conduct aerial inspections in Khao Kwang and found that the area is a bamboo forest with strong winds and low humidity at present. A team of 45 firefighters from the Department of National Parks, Wildlife and Plant Conservation from the provinces of Nakhon Ratchasima, Ubon Ratchathani and Khon Kaen were dispatched to extinguish the fires in Khao Kwang.

If the fires continue spreading, they could reach Khao Samo Pun. The location has a treking route and is known for many varieties of flowers. Deeper into Khao Samo Pun is a rainforest that is home to many plant species and wild animals. If the flames continue to spread, they could have an adverse impact on natural resources and wildlife.