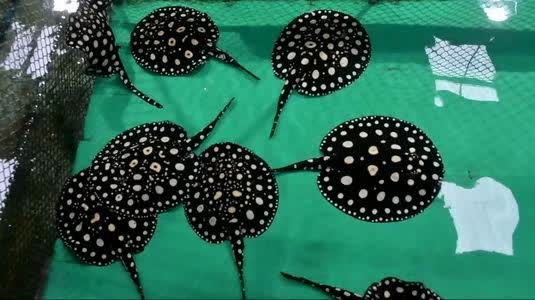 NONG KHAI(NNT) - The largest black diamond stingray farm in the northeastern region of Thailand is officially opened to the public, with two tours of 15 people at a time on a daily basis

The farm owner, Wuthikrai Changlek, recently won the annual outstanding farmers award for raising decorative fish and aquatic plants. He explained that the farm produces three grades of stingray with C Grade animals priced between 4,000 and 5,000 baht and mostly sold to Chinese, Vietnamese and Filipino buyers. B Grade stingrays sell between 5,000 and 10,000 baht and are bought by customers from across Asia, Europe and the Americas, while A Grade rays, worth 10,000 baht to over 100,000 baht, are prized by Japanese, European and United States buyers.

Freshwater black diamond stingrays are originally from Brazil and other parts of South America. They are highly valued sea creatures distinguished by their black torso and white spots. Those with short tails and large fins fetch a higher price.

The dragon fish are similarly prized, especially for their dragon-like whiskers. They are believed to bring good fortune and are sought by mostly Asian buyers, who find them to be graceful as well as intimidating. They are among the most sought after and highest priced fish in the world.

Dragonray Aquatic is also designed to serve as a travel destination and offers lessons on organic farming. People can contact the farm at 086 458 7190.