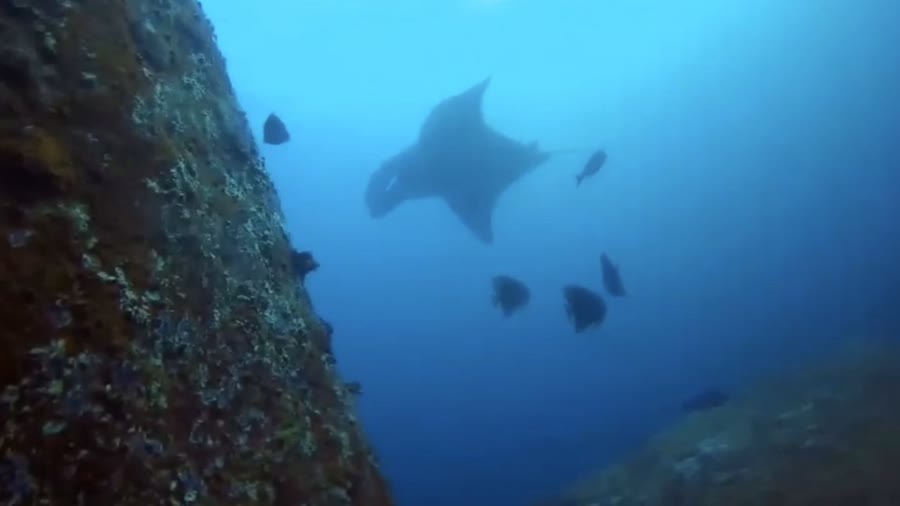 PHANG NGA (NNT) - Marine resources conservation efforts have paid off in Phang Nga, where divers have found a 5-meter long Manta Ray in the sea close to an island in Mu Ko Similan National Park in Phang Nga, a rare discovery which brought joy to those who witnessed it.

A scuba diving guide Somporn Kaewmaneechoti has told reporters that the manta ray was found in the morning while he was taking tourists out to dive at a spot close to Ta Chai Island, located within the Mu Ko Similan National Park in Phang Nga. A manta ray, about 4-5 meters long, was found 18 meters below the surface and was swimming around for a while before disappearing.He said the divers and he were thrilled and glad to witness the appearance of such a rare marine animal.

He said these efforts have led to a lower fatality rate among marine animals ingesting marine debris, and has allowed coral to recover. Since the opening of Ko Ta Chai to tourists again this year, there have been more frequent sightings of rare iconic sea animals such as dolphins, whale sharks, shark rays, and manta rays in the area.

In Rayong, tourists and villagers have spotted three dolphins swimming close to Sri Ban Phe pier. Many people have taken pictures of them using their phones out of delight. Local people said dolphins were spotted in the area in the past along the route to Ko Samet Island, but their appearance close to the shore is a sign of recovered marine resources.

An official from Khao Laem Ya–Mu Ko Samet National Park said today those three dolphins are likely to be bottlenose dolphins, a sea mammal with navy-ish and grey skin with pink hue on their belly. They can be identified by their large but rather short snout, rather large and curvy fin in the middle of its back, and a rather chubby body. A fully grown bottlenose dolphin’s length is usually 2-3 meters.

The official said bottlenose dolphins usually stay with their school, suspecting that these three dolphins could be lost and should be led back to the deep sea.