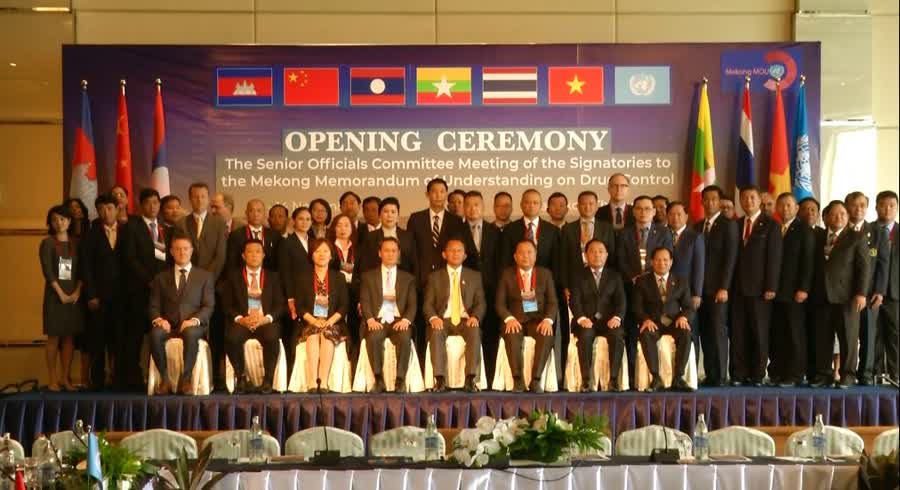 BANGKOK (NNT) - Signatories of the Safe Mekong Coordination Project have discussed suppression of substances used to produce narcotics, as some illicit producers have turned to chemicals instead of opium to produce amphetamines and meth.

The Minister of Justice Somsak Thepsutin officiated at the senior officials meeting of signatories to the Mekong Memorandum of Understanding (MOU) on Drug Control, namely China, Myanmar, Laos, Cambodia, Vietnam, Thailand, and the United Nations Office on Drugs and Crime (UNODC). The meeting was held at the Royal Orchid Sheraton hotel in Bangkok.

The officials exchanged operational plans to prevent illicit production, trade, and abuse of drugs in the Mekong subregion, particularly from [opium] farming, drugs production, and trading in the Golden Triangle area where traffickers operate.

The six countries and UNODC are now working together to draft the 11th regional operational plan on drugs control, which will be completed in the next 2-3 days, in response to a production shift in the Golden Triangle where illegal producers have changed their ingredients from opium to chemicals. The Office of the Narcotics Control Board has discovered that some of the amphetamines and crystal methamphetamine sold legally is now made from chemicals imported legally from Thailand, China, and India. The new operational plan is intended to prevent these chemicals from being in the possession of drugs producers.

In addition to the MOU, the government has implemented a measure to reduce the demand for drugs in the country, as new producers will keep on emerging regardless of how many have been busted as long as there is demand. The government is asking the general public to participate in drugs suppression by taking care of their family members, communities, and society, and to regard users as patients, giving them the opportunity to receive treatment and rehabilitation instead of legal prosecution.