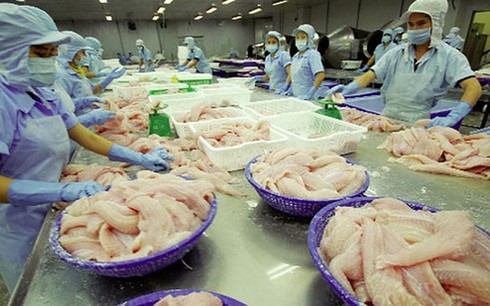 VIETNAM(VOV) - Tra fish exports to the US, Brazil, and Mexico plummeted during the first nine months of the year, making it likely that the products will record negative growth for the year.

According to the Vietnam Association of Seafood Exporters and Producers (VASEP), the total export value of Vietnamese tra fish, also known as pangasius, suffered a drop of 8.5 per cent to US$1.46 billion during the reviewed period.

September alone saw the export value of tra fish continue to drop by 14.6 per cent, of which exports to markets such as the US, EU, Brazil, Mexico, and Colombia plunged.

Most notably, during the nine-month period, tra fish exports to the US market fell by 43.6 per cent to US$208 million, accounting for 14.3 per cent of the total value.

This fall represents the largest decline seen in the US market over the past five years, with tra fish exports to the market expected to endure an increasing fall during the fourth quarter.

Exports of the fish product to major markets such as Mexico, Brazil, and Colombia have been continuously decreasing since the beginning of the year.

With these trends, it is anticipated that the export value of the product to these markets will experience negative growth during the remaining months of the year.

With regard to the ASEAN market, after recording positive growth for half a year, the growth rate has started to become sluggish. As of the end of September, the export value of tra fish to the ASEAN market reached US$147 million, an annual increase of 1.4 per cent.

In contrast, the export value to the Chinese market saw an upward trend, accounting for 30.9 per cent of the total export value during the reviewed period with US$450.7 million, up 19.6 per cent on-year.