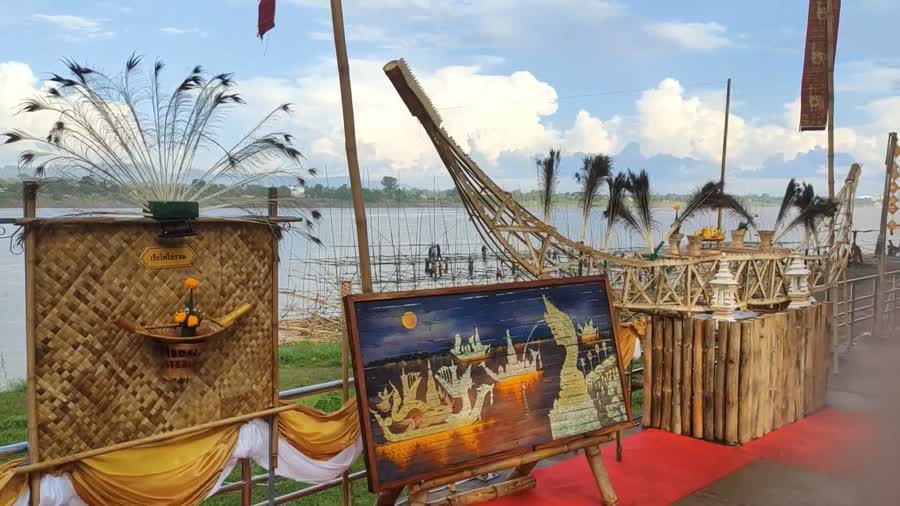 Nakhon Phanom (NNT) - The end of Buddhist Lent this weekend is being marked by a special Illuminated Boat Procession on the Mekong river in Nakhon Phanom. Villagers today came to the riverside to build illuminated boats and open booths promoting the identity and heritage of different communities in the province.

There’s a lively scene by the Mekong River in Nakhon Phanom City Municipality today where villagers from 12 districts are building their boats for the Illuminated Boat Procession held at the end of Buddhist Lent every year.

Tools and equipment such as bamboo, motorcycle tyres, lanterns, and steel structures have been brought to the riverside site, for the construction of the boats and booths.

13 booths are being constructed, one of which is displaying well known local pineapples from Tha Uthen district as decor on the fences, and as a photographic backdrop. This type of pineapple has received Geographic Indication certification. Some of the pineapples being used as decor are inedible and have become deformed from the excessive use of nitrogen fertilizer, resulting in the unusual shapes.

The Illuminated Boat Procession is a local tradition, long conserved in Nakhon Phanom Province. It takes place every year on the night of the full moon in the 11th lunar month, which falls on the 13th October this year, and is a time of worship to Lord Buddha.

This year, at least 13 illuminated boats will sail along the Mekong River, creating a spectacular night scene for visitors in the evening of 13th October. The boats and booths will stay on display until Monday, 14th October.