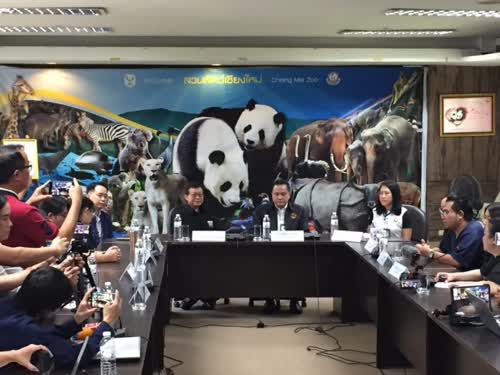 CHIANG MAI, 17 September 2019 (NNT) - Chiang Mai Zoo this week announced the sudden death of a 19-year-old panda named Chuang Chuang. The cause of death remains unconfirmed pending an autopsy by a team of veterinarians from China.

The Zoological Park Organization under Royal Patronage’s Deputy Director General, Sumate Kamolnorranath, along with Chiang Mai Zoo’s Director Wutthichai Muangmun and the veterinary team made an announcement on Tuesday confirming the death of a 19-year-old panda "Chuang Chuang" at Chiang Mai Zoo on Monday. The male panda was part of the Thailand-China giant panda research project.

Chiang Mai Zoo’s director said the panda showed impaired balance and collapsed on Monday evening in the exhibition area, according to CCTV footage. The veterinarians immediately responded and tried to detect the vital signs of the panda, which was found to have already died. The panda’s body is now being kept at Chiang Mai Animal Hospital.

The cause of death of the much loved panda remains unknown at the moment, as the autopsy must be done by veterinarians from China, who have already been informed and are coming to Thailand as soon as possible. The zoo staff is wearing black and white attire to mourn the loss of the beloved panda, while it is still uncertain whether the panda’s partnet Lin Hui will have to be transported back to China, pending official discussions with the visiting team.

One of the veterinarians taking care of Chuang Chuang, Kannikar Nimtrakul said she is astounded, and feels like she has lost her own son.

In the morning, female panda Lin Hui came out and ate bamboos as normal. The zoo remains open as usual, however a mourning board will be put up in Chuang Chuang’s exhibition area for visitors to write their messages of condolences.

The Minister of Natural Resources and the Environment Warawut Silpa-archa, said on Tuesday that the Thai authorities are now waiting for the autopsy to be performed by Chinese officials, adding that it is unknown at this stage whether China will send another panda to Thailand as a token of diplomacy, or whether they will recall Lin Hui to China.

Meanwhile, on the recent deaths of 86 tigers, previously seized from Wat Pha Luang Ta Bua Yanasampanno Temple in Kanchanaburi, the Environment Minister said the tigers suffered from poor immune systems due to inbreeding. He said the ministry will inspect the tigers’ bodies to prevent trafficking of their parts, after receiving a complaint from the temple’s abbot. He added that Thailand is not a suitable habitat for Siberian tigers due to the tropical climate.