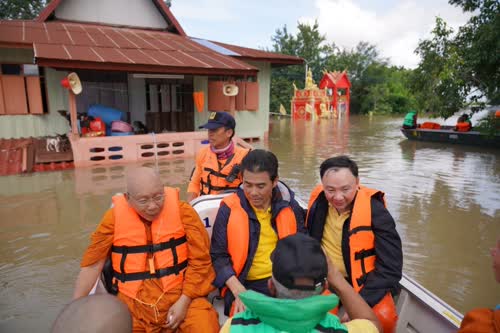 UBON RATCHATHANI, 15 September 2019(NNT)-The Minister attached to the Prime Minister’s Office, Tewan Liptapallop, visited people in flood-affected areas of Ubon Ratchanthani province. The water level of the Moon River has now dropped by one centimeter, but it will take some time for the flood water to be completely drained away, as the water level is almost four meters higher than the river banks.

Meanwhile, in Phibun Mangsahan district, the Governor of Ubon Ratchathani, Sarit Withoon, said after inspecting the flood situation in the province with Director-General of the Royal Irrigation Department (RID), Dr. Thongplew Kongjun, that water from the M7 water monitoring station to the Moon River in Khong Chiam district has steadily decreased, while the water flow velocity has increased, which is a positive sign.

The RID Director-General said his department will increase the number of propeller pumps from 100 to 200 to accelerate the drainage of water into downstream areas. They can be implemented at this time because the water level of the Mekong River is still low. Officials will do their best to restore the situation in Ubon Ratchathani, so that people can return to their homes faster than had been expected.

Meanwhile, Somdet Phra Mahathera Jarn of the Supreme Council of Thailand and Prime Minister’s Office Minister Tewan, who oversees the National Office of Buddhism, have presented offerings to monks and novices and survival kits to flood-affected people in the Chaeramae sub-district of Muang Ubon Ratchathani district. They also inspected the water situation by boat, met with monks at a partly submerged temple, gave moral support to the local people in Nam Saep sub-district of Warin Chamrap district, and visited a mobile kitchen at Warin Chamrap Municipality.

Mr. Tewan said recent floods have affected 700 monks and 97 temples in Ubon Ratchathani. He said the government is working to overcome the present water situation and assess the damage caused by the floods, before implementing remedial measures as soon as possible.