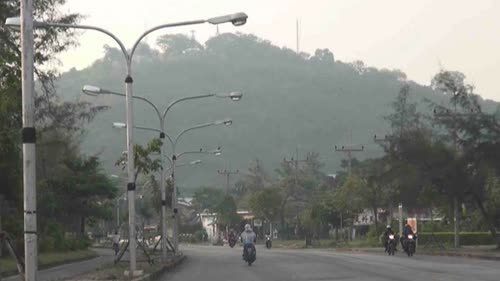 SONGKHLA, 11 September 2019(NNT) - Haze generated by smoke from Indonesian forest fires has continued to affect the southern provinces of Thailand. Although the air pollution index has not reached unhealthy levels in Yala and Songkhla provinces, people in risk groups, such as the elderly, children, and people with medical conditions, have been warned to take precautions against respiratory illnesses.

A total of 161 hotspots have been identified throughout Sumatra Island, as the wind keeps bringing smoke from Indonesia to the southern Thai province of Songkhla. However, the smoke has become less dense due to heavy rain over the past two days. Nu Island can still be seen from Songkhla, but smoke has reduced visibility on Maew Island. According to the Air4Thai mobile application, levels of particles of a diameter that is 2.5 micrometers and smaller were measured at 44 micrograms per cubic meter in Songkhla, while the Air Quality Index (AQI) was measured at 76 micrograms per cubic meter. As such, they have not reached unhealthy levels.

The haze situation in Yala eased this morning, thanks to continuous rainfall in the southern province over the past few days, with clearer skies and sunlight in some areas.

The air pollution index in Yala hasn’t reached unhealthy levels, but people in risk groups, such as pregnant women, children, the elderly and those with medical conditions, should wear protective masks and avoid outdoor activities.

All sectors are closely monitoring air quality and preparing tools, equipment and protective masks if the situation worsens.