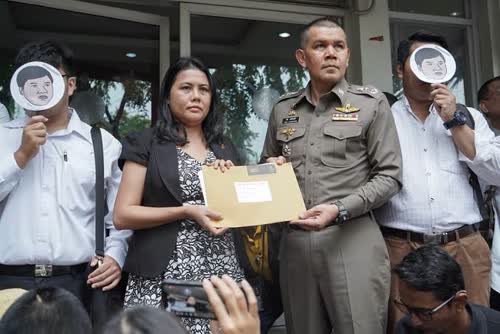 BANGKOK, 3 July 2019(NNT) - The Director of Amnesty International Thailand, Piyanut Kotsan, and some 20 activists have called on authorities to arrest a group of unknown attackers who assaulted political activist Sirawith "Ja New" Seritiwat last month and provide updates on their investigation.

Mrs. Piyanut together with some 20 activities submitted an open letter to the Deputy Prime Minister and Defense Minister, Gen. Prawit Wongsuwan, and the Commissioner-General of the Royal Thai Police, Pol. Gen. Chakthip Chaijinda today. The group called on the authorities to uphold and protect the right to freedom of expression, and speed up their investigation into the assault of Ja New. The group wore Ja New masks and held "We Are All Ja New" signs.

The Director of Amnesty International, said today the attacks on political activists, such as Ja New, Anurak Jeantawanich, and Ekkachai Hongkangwan, showed that these individuals do not receive protection even though they have legitimately exercised their rights. As a result, all activists are in danger of being attacked. Mrs. Piyanut said the police have to arrest and prosecute the culprits and provide updates on their investigation to ensure transparency.

The Deputy Commissioner of the Special Branch Police, Pol. Maj. Gen. Tanai Apichartseni, accepted the open letter from the activists. He said the national police chief is closely working on the case and has instructed officers to track down the suspects. He said the police will provide updates on their investigation on a regular basis.

Referring to a comment made by a core member of the Pheu Thai Party, Pol. Capt. Chalerm Yubamrung, who claimed that some police officers are providing asylum to two to four people suspected of assaulting Ja New, Pol. Maj. Gen. Tanai said the police are open to information from all sides. He said anyone who has clues about the case can contact the police immediately.