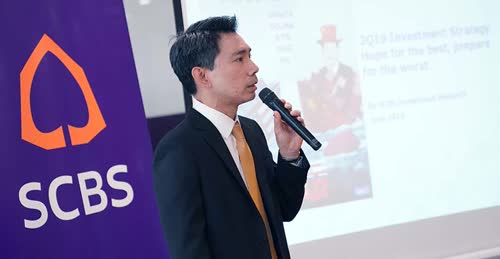 BANGKOK, 3 July 2019(NNT) - The trade war between China and the United States is in the process of negotiation and there is no indication that the United States will raise import tariffs on China imports, another 300 billion US dollars. This has benefitted the Thai stock market which may now rise to 1,750 points.

Mr. Sukit Udomsirikun, Managing Director of the Research Division, SCB Securities, said today the Thai stock market in the third quarter is in its best situation this year. The index has an opportunity to reach 1,750 points, which is the target forecast by the Siam Commercial Bank (SCB). However, investors must beware of profit-taking because the Thai stock index has risen a lot. It is also necessary to follow the Federal Reserve’s meeting and developments in the trade war between the United States and China.

The SCB has expressed its belief that the Federal Reserve will not reduce the interest rate at its meeting in July after seeing that the United States is not raising import tariffs on China at this stage. It is expected that the SCB will continue to follow the overall situation of the United States’ economy to see how much it is adversely affected by the trade war, while there is a chance that the interest rate will be further reduced in September 2019.

As for the overall picture, the Thai economy is likely to slow again from a growth rate of 3.3 percent due to the slowdown in exports. Therefore, it is necessary to rely mainly on consumption, investment and tourism and follow up on the constant baht which could reach 30 baht per USD in this period.