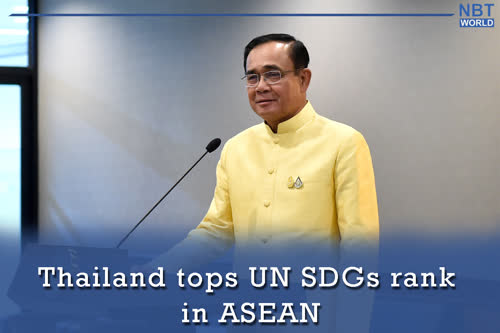 BANGKOK, 1 July 2019(NNT) - The Prime Minister is satisfied with the latest Sustainable Development Goals (SDGs) ranking where Thailand’s is in 40th place and the highest placed country in ASEAN.

Deputy Government Spokesman Lt Gen Werachon Sukondhapatipak said the Prime Minister has acknowledged and is satisfied with Thailand’s latest position on the UN SDGs ranking this year, on which the country’s ranking advanced by 19 positions.

Other ASEAN countries have also been ranked for their SDGs achievements, namely Vietnam at the 54th, Singapore at the 66th, Malaysia at the 68th, the Philippines at the 97th, Indonesia at the 102nd, Myanmar at the 110th, the Lao PDR at the 111th, Cambodia at the 112th, while Brunei has not been ranked.