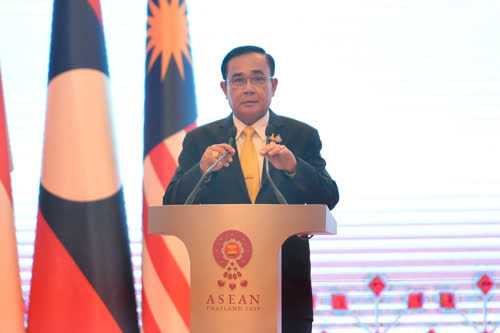 After the press conference, the Deputy Government Spokesman, Lt. Gen. Werachon Sukondhapatipak, quoted Gen. Prayut as saying the he was honored that the Thai government hosted the 34th ASEAN Summit, as this was a good opportunity for member countries to work together to support the building of an ASEAN Community that is people-centered, leaves no one behind and looks to the future. This is in line with the official theme of Thailand’s ASEAN Chairmanship in 2019, "Advancing Partnership for Sustainability".

At the summit, the ASEAN leaders supported Thailand’s initiatives and undertakings to enhance regional sustainability in all ways. They also endorsed the official theme of Thailand’s ASEAN Chairmanship this year.

The ASEAN leaders reaffirmed the shared commitment to maintaining peace and security in the region, and agreed on the need to strengthen regional collaboration on public health. The summit also adopted the Bangkok Declaration on Combating Marine Debris in the region, which demonstrates the bloc’s commitment to addressing the problem in a sustainable manner.

The meeting discussed ways to enhance ASEAN’s capabilities and cooperation in disaster management and emergency response. On this occasion, the delegates jointly launched the Disaster Emergency Logistics System for ASEAN (DELSA) and endorsed the development of the ASEAN Center of Military Medicine (ACMM).

The summit adopted the ASEAN leaders’ statement on the ASEAN Cultural Year 2019 and promoted the ASEAN Inter-Parliamentary Assembly (AIPA), youth groups and the business sector, to build a people-centered ASEAN Community.

The ASEAN leaders also reaffirmed the importance of the Treaty of Amity and Cooperation in Southeast Asia (TAC) as the code of conduct governing interstate relations. They also resolved to conclude negotiations on the Regional Comprehensive Economic Partnership (RCEP) this year to help the bloc adapt to changes and uncertainties in the region, such as trade tensions with key trading partners.

Four ASEAN member countries, Thailand, Indonesia, Singapore and Vietnam, will take part in the G20 Summit this year to announce the bloc’s stance on ongoing trade war issues. ASEAN would like the situation to ease quickly.

The summit acknowledged the new ASEAN Secretariat building in Jakarta, Indonesia. It will open officially on August 8 this year. The new building will be utilized for ASEAN-related meetings and events, while ensuring efficiency in operational activities.

Prime Minister Prayut said ASEAN will launch a joint bid to host the 2034 World Cup. On this occasion, Gen. Prayut invited the ASEAN people to support their football associations in their respective countries to achieve this objective.

The Thai Prime Minister also thanked all ASEAN leaders for expressing their support for Thailand as the host country of the 34th ASEAN Summit and as the bloc’s chair this year. He also thanked all agencies and members of the public for their cooperation and for being good hosts. Gen. Prayut insisted that the ASEAN leaders will strengthen existing frameworks of cooperation at the regional and sub-regional levels and generate tangible and concrete outcomes for the benefit of ASEAN’s people.