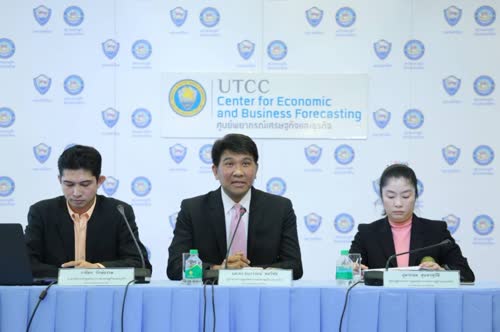 BANGKOK, 6 February 2019 (NNT) - Public confidence in the expansion of the Thai economy continues to improve after a clear election date has been set fourth and a comeback in the number of Chinese tourists. The University of the Thai Chamber of Commerce expects spending during Valentines and Makha Bucha Day at no less than 6.3 billion baht.

Director of the Economic and Business Forecasting Center at the UTCC Thanawat Polvichai revealed that the consumer confidence index in January 2019 stood at 54.5, improving for the first time in 5 months, as consumers perceived that the election date would clearly benefit the Thai economy. Meanwhile, the trade war between the United States and China is beginning to ease while Chinese tourists are also beginning to return to Thailand. These factors, in addition to the rise in many agricultural prices, should result in the increased purchasing power and public confidence.

The consumer confidence index in the future over the next 6 months also improved to a level of 92.3.

Surveys of spending during Valentines day expects no less than 3.7 billion baht in spending, down from the same period last year by 3.17%, the first negative rate in 13 years due to consecutive festivals, including Chinese New Year, Valentine’s Day and Makha Bucha Day. The drop reflects the cautious spending behavior and worries over economic expansion. Spending among couples is expected at around 2.3 billion baht over mostly gifts, flowers, chocolates and eating out.

Spending during Makha Bucha Day is expected to expand by 3.12% to over 2.6 billion baht, averaging at 1,642 baht per person. Most activities include making merit, giving alms, and vacationing.